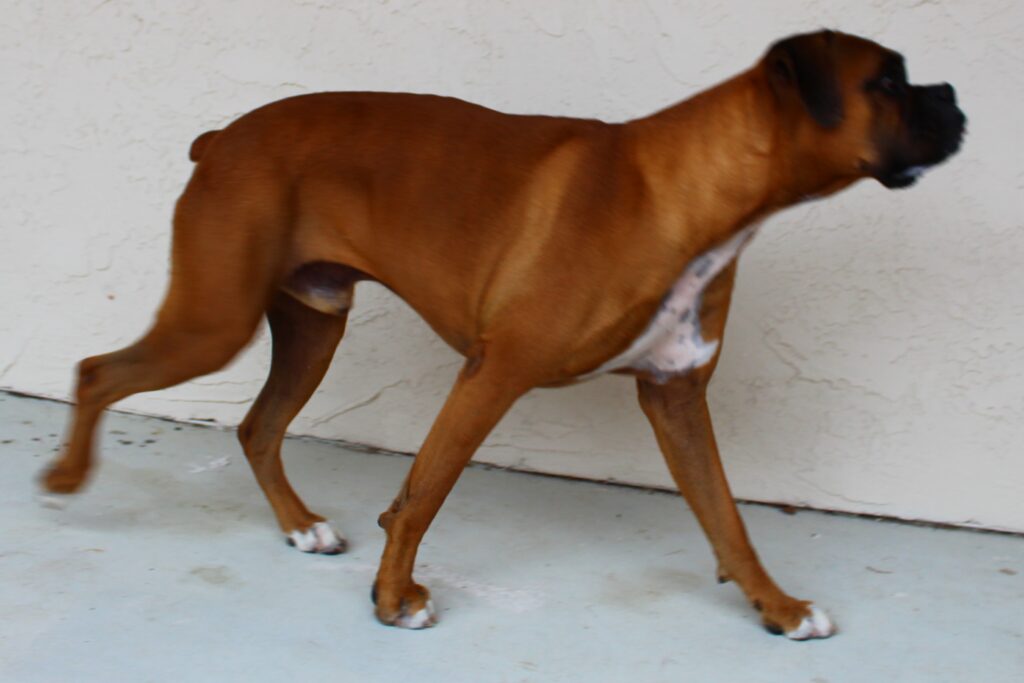 Every pup has a special story, please allow me to share Jagermeister's with you...it just may change your own pup's life. 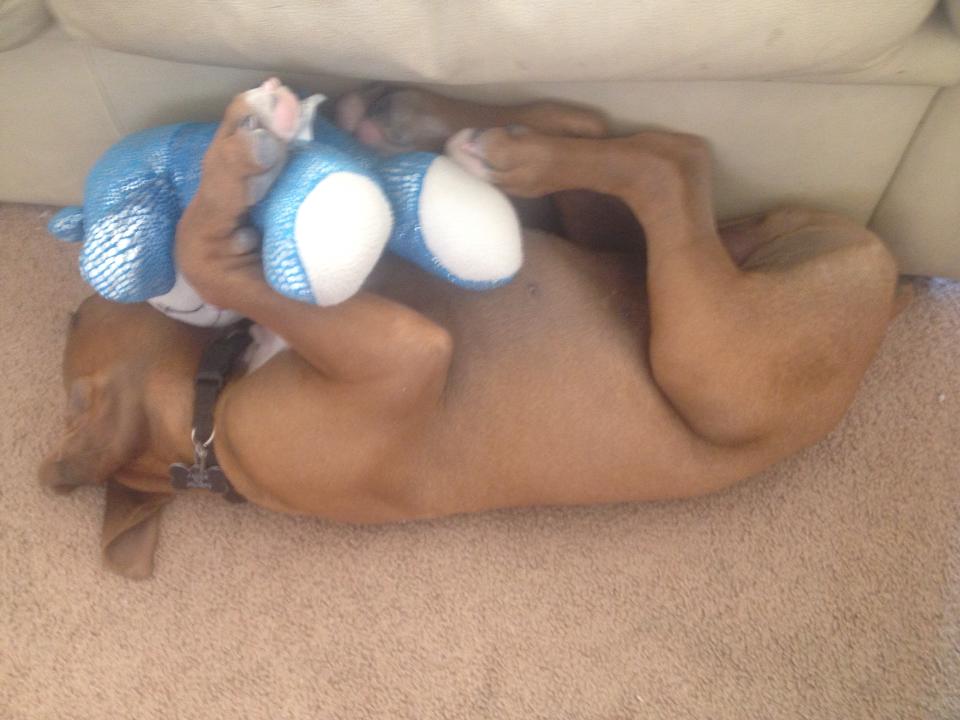 My parents brought their bouncing baby boy home, Jagermeister, in 2013.  H was healthy, happy and alert!  As all good pup parents, they made an appointment to see their Vet for Jager’s vaccinations.  A couple of days later, their baby boy seemed very weak, wouldn’t play, wouldn’t eat, and just overall seemed sick.  They had kept him inside, ensuring not to expose him to any potential diseases, as he had not yet completed his series of vaccinations.  It turned out that Jager had contracted Parvo while at the vet office.  My mother was determined to save him.  And, against all odds, she did!  With lots of fluids from a baby bottle, tons of love and comforting, Jagermeister survived!

Although my mother was Jagermeister’s savior, he was really my father’s loyal pup and companion for the next several years to come.  As older pup parents, Jager was not exposed to much.  They stayed home a lot.  People would come over to visit.  I would bring my pup to play.  But, they really didn’t venture out.  As a result, Jager did not receive much socializization.

My father was very ill for about a year.  Jager never left his side.  He would lie next to my dad for hours; sit by his bedside; follow him if he got up to go to the kitchen or the restroom.

In February of 2019, my father passed away.  Of course, we were all distraught and filled with grief.  But, as humans, at least we understood what had happened. Have you ever watched a pup experience the loss of a loved one?  It’s heart wrenching.  Jagermeister just walked around slowly, looking confused.  He would lie next to my father’s favorite spot on the couch.  He barely ate or drank.  He would walk down the hall, but stop short of my father’s bedroom.  To this day, Jagermeister has not stepped paw into my father’s room. 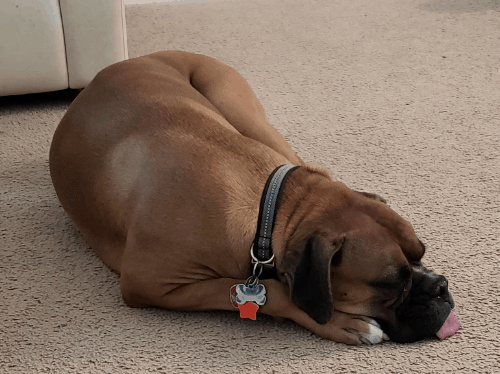 My mother is very petite.  And, Jager is super strong.  I knew that if Jager stayed with my mom that he would never get to experience life as intended for a pup.  He was just too much for her to handle.  It was decided that I would adopt Jagermeister.  He was already best friends with my pup, he knew us, an it just made sense.  And, taking my father’s beloved Boxer during my own time of grief gave me a certain amount of comfort.  We needed each other. 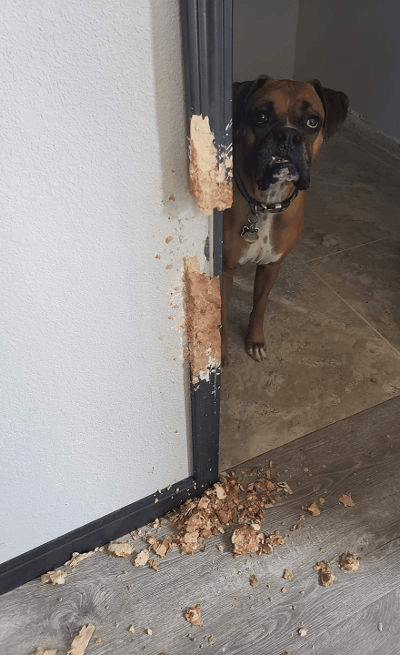 I brought Jager home.  It was not an easy transition.  He was very nervous, jumpy, skittish.  As mentioned, he didn’t receive much socialization as a pup, so everything was very scary to him.

One day, I had to run some errands, so I put the pups in my office.  They hang out with me all day while I work, so I figured while I was gone, the office would be the most comfortable and familiar place for Jagermeister during my absence.  When I returned home, Jager had completely eaten through my office door.

A few days later, my daughter had let the pups out to potty.  All of a sudden, I heard a loud splash.  Poor Jagermeister had fallen into the freezing cold pool.  By the time I got there, he had already managed to get himself out.  He’d never been around a pool before and he had no idea he couldn’t walk on water!

Chalk up more anxiety for this poor pup.

He wasn’t eating.  He wasn’t playing.  He would just lie around.  He was grief-stricken, missing my father, confused about where his person was, confused about this new place that was now supposed to be “home.”  It was absolutely heart wrenching.

And not only was Jager suffering from depression, but he was also experiencing pain in his hips. He almost seemed to grimace when he would sit down and get up. It was obvious he was hurting.

I knew I had to do something for poor Jagermeister.

I started researching depression and anxiety in pups, as well as pain. And, I learned about an amazing product that had proven beneficial for humans, as well as pups:

I decided to give it a try!

Jagermeister improved drastically!  He started playing. And smiling. And running and jumping with my other pup!  I absolutely could not believe the difference!  He no longer seemed depressed.  And, he no longer appeared as if he was in pain.  It truly was amazing.

Now, Jagermeister is experiencing the quality of life that every pup deserves.  He rides in the car (still a struggle sometimes, but he can do it!), we go to the dog park, he’s been on vacation.  He was such a loyal companion to my father, truly selfless.  And, now, it’s Jager’s turn to see what life has to offer!

From that point forward, I was committed to developing PupHubNow’s own proprietary blend, so that other pup parents could help their own pups.  PupHubNow has created a product with all the essential components that have been deemed beneficial in relieving aches, pains, anxiety and seizures in pups.  And, since Jager also suffered from dry skin, I included additional ingredients to better improve his skin and coat.

Thank you for taking the time to read Jagermeister’s story.  Because this product is so near and dear to my heart and my own family, I have done my very best to offer you our product at the most affordable priced on the market.  I want every pup parent to be able to get this product into their hands and their pup’s paws if their pup is suffering, just like Jager was.  Every pup deserves quality of life. 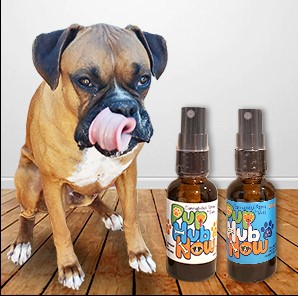